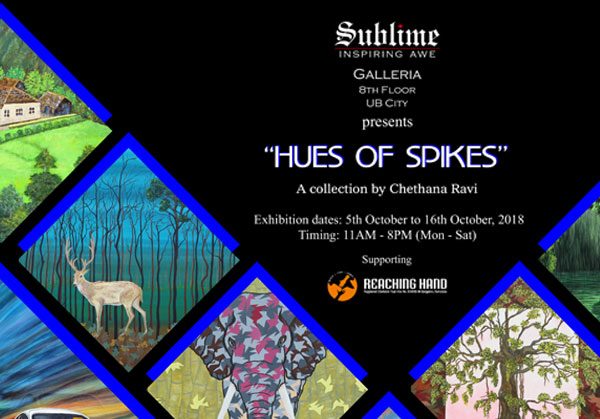 Chetana Ravi, a self taught painter, trained in electronics engineering and involved in interior design and curious about gender studies, is an artist whose primordial mode of visual representation is ‘ surrealistic’ in attitude. There are snake charmers, Sufi saints, Pegasus and a whole list of characters who belong to various and varied geographic, mythical and historicities.  The style in which she paints them also acts as an abode wherein all of her subjects can co-exist, forgetting their mutual cultural and ideological differences.  At this juncture, this artist’s ‘style’ — of flat multi-chromatic colours, keenness towards the realistic world out there, an eye for details and a genuine effort in building an ambience in support of each of her subject — hence, has the ability to include many things that she wills to paint. At the same, testing herself through this show as to whether she can turn this ability to paint ‘many’ subjects into ‘any’ subject, is the genuine attempt to further her abilities as a painter.

Surely, Chetana displays a whole gamut of representational abilities, without any reservations. Her artworks reveal a talented painter within her, curious at culturally mutually deviant subjects. And the artist smartly unifies all of them through her own style underlined by skilled rendering. Before elaborating how Chetana’s style of painting is open-ended, one should keep in mind that she loves her blues and greens and those regularly recurring ‘spike’ shaped imagery as well.

In her paintings, a bull might, though ambiguously, represent the share market and a girl in an open frame with free birds and books might indicate a certain feminist stand point, this is just a hint that the artist in Chetana is prepared for a  bigger and wider visual adventure, beyond her current strength of stylistic maturity.