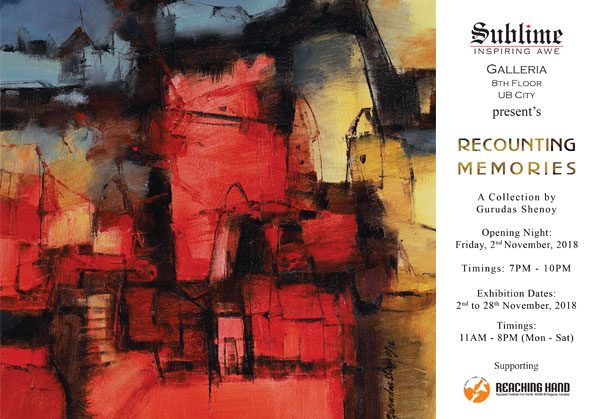 Gurudas Shenoy’s urban spaces recount narratives constructed around places, their architecture and history to form visual chronicles. The irregular façades of structural forms conceal stories of life and living. An array of emotions, personal and collective sagas and memories lie embedded within the walls of settlements. Archives of human existence entrenched in every brick and piece of glass, the inanimate captures the living breath within its folds.

The colours and the sights and sounds of nature from the verdant landscape of Udupi in Karnataka, a beautiful coastal town by the Arabian Sea and the Western Ghats, are ingrained in Shenoy’s subconscious. Along with the lush natural surroundings, the vibrant cultural environment from the region with its folk arts, music and dance has also influenced him deeply. The spirit of celebration imbued in the performances of Yakshagana, Bayalata, Bhoota and Nagamandala has contributed to his visual language.

The evolution of the current series of cityscapes can be traced to his travels across India and Europe. A significant point in his artistic journey, the European visual and cultural environment opened up entirely new vistas for him. It triggered rigorous experimentations on canvas, and an expansiveness in his imagination and thought, resulting in a fresh vocabulary. Paris, Amsterdam and Prague amongst other cities, contributed to a refined aesthetic in terms of colours, lines, form, light and textures, leading him to explore the city in its vitality, sheer energy and its resplendence. His fascination with buildings, old and new, their historicity, and their silent role as witnesses to time and its transformation, their inhabitants and their lives with all its variations, became a muse.

Shenoy’s urban structures have evolved organically into fluid forms, and a palpable restraint is evident, yet, the colour palette has intensified and earthy colours have made way for brilliant aquamarines and vermilions. The glint of sunlight on the tranquil waters of the Arabian Sea and the rays of reflected light from the rocks effortlessly merge with newer experiences and memories of distant cityscapes. The portrait and the soul of a city are construed as an impression, an intuitive process that transforms into contemplative images. The city, thus emerges, representative of a collective identity, no longer demarcated by inflexible boundaries, but breathing as a singular being.

A charcoal drawing initiates the process of painting, but soon layers of paint dominate it into a tempered existence, and the play of light, colours and textures highlight and delineate elements into subtly differentiated spaces. The absence of human figures in his works is a subtle reference to the ephemeral character of man’s existence, the transience of life, in stark contrast with the remnants and relics of civilizations that survive generations.

Apart from the cityscapes, Shenoy’s newer works occupy a transitory space, where the structures from an urban skyline gently dissolve their linearity and are suggestive of memories of land and the surrounding environment. Undulating terrains, open skies and hints of topographical details speckle the surface and the works become calmer and unencumbered in their exploration. Perhaps, meditative too, reflecting Shenoy’s state of mind and a personal sense of serenity that he now embraces. The experimentations with colours and textures intensify, and he continues to gravitate further towards abstraction. He revisits landscapes – from places he has travelled to, and represents them as snapshots in time and space. The colours are vivid with strong and often dramatic brushstrokes that capture the essence of the memory – of land, its contours and colours, the play of light and the prevalent mood.