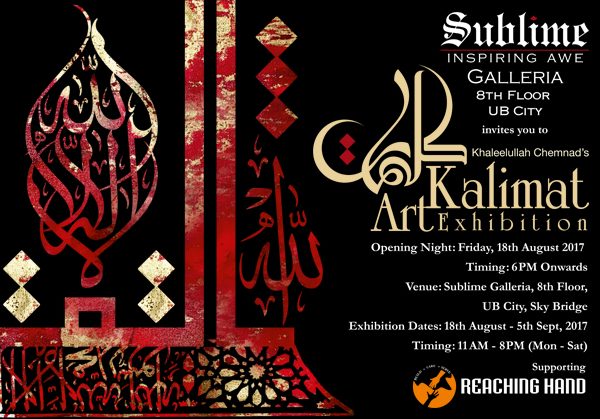 Mohammed Hassan Khaleelullah’s story can be summarised as a young boy taking tiny steps into the world of artistry, to his exponential growth into a man who is the current world-record holder in his field of art calligraphy.

Born in 1972 in Chemnad, a village in Kasaragod, located in the state of Kerala; Khaleel was fond of Art & Literature much like his well-known writer-father M.H. Seethi who was also a Social Worker. At the tender age of 13, he found himself inclined towards drawings of calligraphy, a time during which, the art was nothing more than rocket science to most of his fellow countrymen. The journey since has been a decorated one, from being a regular at calligraphic conferences and exhibitions the world-over, to being the recipient of 15 awards in Art & Literature, including the World Health Organization (WHO) Award, the Anti-Narcotic Movement Award, and the Kerala Cartoon Academy Award, amongst many others.

Khaleel, is also the first ever artist in the world who has used “Anatomic Calligraphy”, a style developed through years of hard work and dedication that several artists follow these days.

Popular for creating wonders with Arabic letters through his calligraphic works, Khaleel, has today established himself as an inimitable artist in the field of Arabic Calligraphy earning the recognition of the Arab-world at large. His calligraphic logos are a mark of Prestige, for many of the top ranked firms in the United Arab Emirates.

Currently, Khaleel runs his own advertising agency in Dubai, and when asked about his best piece of work, quips “my best calligraphy is yet to be drawn. It is my dream project, and will be a great work of anatomic calligraphy that will be a landmark in world history.”