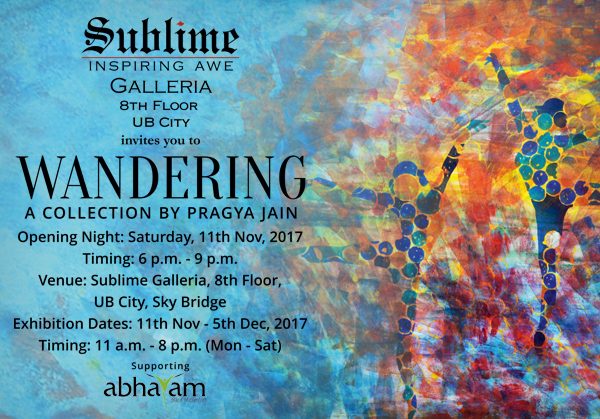 When something is happening or likely to happen unplanned, it brings results that could be thrilling and uplifting. Pragya Jain’s latest exhibit is planned around a sense of unintended, accidental, unexpected works that yet hold together the essence of her original style of painting. Along with a sense of freedom to choose the end result, taking risks with her brush strokes, and drizzling paint on her geometric patterned canvases was a large part of this fulfilling experience. She found herself wandering with no fear.

If an occurrence or someone’s behaviour is unexpected, it is surprising. Sometimes even without structure, something optimistic and fresh can be the outcome. It’s just about fighting the demons in one’s own mind to overcome these obsessions and fixations, to have a different perspective. For Pragya, putting together all the works for “Wandering” over a period of six months has been a living example of the same. Having spent a lot of time on each work, each artwork created and determined its own personality. Some works being more dominant & striking, while others were more submissive & fluid.